The Passing of Russell 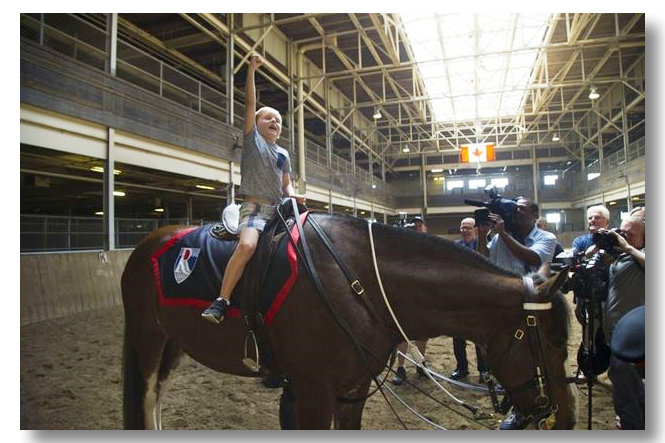 Nolan Russell, then 7, punches the air in happiness after mounting the Clydesdale named Russell in honor of his father, who died on duty in 2011. June 21, 2016. - Chris So/Toronto Star

Given the long association of the Force with equine companions and in common cause with other Canadian Police Forces it was felt that we should recognize and sympathize with the Toronto Police Service in the death of a unique horse from their mounted unit.

A special member of the Toronto Police Service’s (TPS) Mounted Unit has died.

Russell, a 10-year-old purebred Clydesdale measuring 17 hands high, was found dead in his stall Friday, July 24, at about 2 p.m.

Toronto police said the cause of death for the horse, who joined the TPS in October 2016 after a year of training, has not yet been determined.

Russell, the horse, was named in honour of Sgt. Ryan Russell, the Toronto police officer killed in the line of duty nine years ago. Russell, who had 11 years of service and last worked out of 52 Division, died on January 12, 2011, after being struck by a man driving a stolen snowplow at Avenue and Davenport roads. A Scarborough native, Russell, who was 35, was an animal lover.
-by Joanna Lavoie