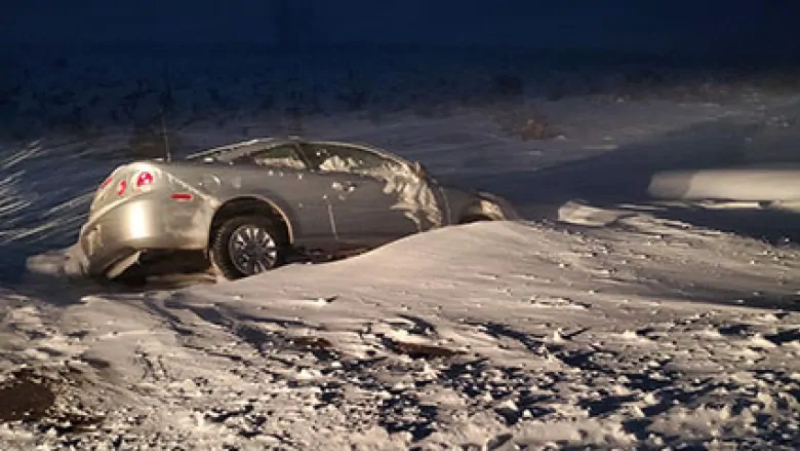 A P.E.I. driver stranded in a ditch for four hours early Monday morning is safe after an RCMP officer noticed his hazard lights and was able to shovel him out.

The officer saw the car’s lights flashing off the side of the highway near the Confederation Bridge at about 6:20 a.m., and stopped to see if everyone was OK.

“They located an elderly gentleman in the car, who was waiting some time for a tow truck,” said RCMP Staff Sgt. Troy MacLean.

“The weather was not safe enough for the tow trucks to be on the road.”

Heavy snowfall and winter storm warnings had been out for the whole Island all day Sunday, and the snow began falling about 9 p.m. High winds and blowing snow were reducing visibility at the time the man went off the road early Monday.

The driver’s door was buried in snow and the passenger door was not working, police said.

After shoveling the snow away from the door on the driver’s side, the officer escorted the man back to his home where he was left in the care of his family.

“He was pretty happy to get out of the vehicle, because he had been there for some time, and get into the warm and dry in his house,” said MacLean.

He stressed that the man was fortunate the RCMP vehicle was passing by.

“It could have been a bad result,” he said, adding that during storms, people should stay home unless travel is absolutely necessary.

“It’s a danger to plows that are on the road as well as any emergency vehicles that have to respond to these calls. It wasn’t safe for us to try to go out and rescue people.”

If drivers must venture out in poor conditions, they need to make sure they have a working cell phone, shovel, and appropriate clothing for the elements, an RCMP news release said.